by Natalia Martínez | May 5, 2022 | Culture of sustainability 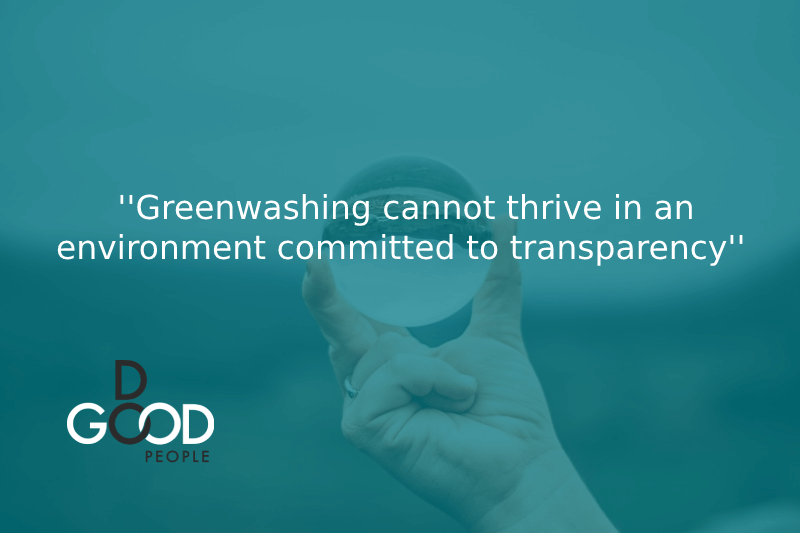 The popularization of the term greenwashing has helped set light to the problem, but the issue of deceiving sustainable and green marketing is far from over.

There was a time not long ago when the word greenwashing seemed to be on everybody’s radar, creating a widely spreaded social awareness on the matter. Many companies had to reconsider their messages and communication strategy to avoid false claims and subsequent reputation losses.

The popularization of the term helped set light to a problem that’s been around us for longer than most of us can probably recall, but the issue of deceiving sustainable and green marketing is far from over. Even as we begin to consciously and knowingly point out those organizations trying to portray an image of something they are not, greenwashing keeps on happening.

But let’s start from the beginning and understand what the term greenwashing implies in order to comprehend why transparency is the only way out of these misleading practices.

The term greenwashing appeared for the first time back in the 1980s and it describes the practice of companies making exaggerated claims about the sustainability and eco-friendly-ness of their products or services in an attempt to gain market share. As sustainability awareness and demand grew among society, so did such dubious corporate allegations in an effort to manage the public perception of their brands.

The lack of regulation, standards and parameters made the greenwashing language a tool for legitimacy, even with the complete absence of public or third party supervision and verification. But as these marketing practices began to grow the public became more skeptical of so called green products as the solution to protect the environment and bring about social wellbeing.

And so for a while greenwashing worked as the easy way out to the actual big and deep changes companies would have had to sustain if they truly wanted to become as sustainable as they were claiming to be. But the exploitation of the sustainable consumer demand soon turned against the companies themselves. The moment greenwashing is perceived consumers cease to trust the product, service and the company as a whole.

As mentioned above, there has come a time when increased greenwashing practices coincided with a growing public awareness and demand for sustainable and responsible products and services. What once was understood as trying to adapt to consumer perceptions has now become a shared concern among consumers and stakeholders for the protection of the environment.

Companies are now more aware than ever of the importance of actually investing in sustainability, making greenwashing a sometimes ‘’unintentional’’ practice, although not less harmful than that which is done on purpose. Even on an involuntary basis, greenwashing overshadows genuine environmental responsibility and creates confusion for the public, as well as being held to great scrutiny.

It is in this context that some companies choose to go quiet in order to avoid possible greenwashing they are not even aware of, which has come to be known as ‘’green hush’’. This is, however, not an ideal solution. Not communicating a company’s work towards sustainability can prevent innovation, a healthy competition that pushes other companies to adopt greener practices. Transparency is in fact the best tool to avoid greenwashing practices, even unintentional ones.

Problems with unintentional greenwashing can come from anywhere in the supply and value chain of the company, for example when a given vendor falsely claims to be following sustainable production methods. But these nuances are often noticed when it is already too late. Here is where transparency comes into play. Through data collection or monitoring frameworks, a company can create transparency for its entire value chain as well as helping find areas that could use some improvement.

Some are even beginning to approach radical transparency and openly display everything that encompasses the organization, from employees to assets, making everyone who may have an interest aware of their practices. In this case, such a transparent approach serves as a back up to any of their sustainability claims, as well as being an example of honesty, showcasing that which is positive and that which still needs improvement.

The bottomline is that greenwashing cannot thrive in an environment that is committed to transparency, as it becomes evidence for their sustainable practices, however big or small, and helps prevent any misunderstanding or misinterpretation of their claims; additionally, it may be an example for other to do the same and together push forward greener alternatives and improvements.

We believe and work for transparency to be one of the key values driving the fight for climate action, social wellbeing and good governance as it is the only way to understand what we are doing wrong, what we are doing right and what it is that we are not doing yet.

Because being transparent is not only an externality to a company, or a given organization, to help build trust and reputation; it is in fact also a great learning and improvement mechanism. You cannot manage what you don’t understand. And so we advocate for transparency, integrity and precision as imperatives to the fight against climate change.

In DoGood we are convinced of the need to understand and manage efforts to achieve a sustainable transition inside an organization for the correct and efficient functioning of the business and the community it operates in. We alone cannot achieve the substantial changes necessary, but we work on the basis of collaboration, transparency and accuracy in order to bring light to sustainable actions.

In this regard, it is essential to our work to promote good corporate governance, meaning that the processes of disclosure and transparency are followed so as to provide regulators and shareholders as well as the general public with precise and accurate information about the financial, operational and other aspects of the company, including a more accurate definition of the ESG performance.

We have developed a corporate government tool that helps establish ESG impact objectives for employees in regards to the sustainability strategy of the company. Through our technology we are able to activate and track employees’ impact, creating engagement that translates into improved ESG metrics, reputational value and an overall positive impact for the environment and society.

If you want to know more about how we work to create a positive social and environmental impact, click here.